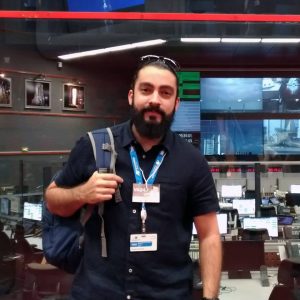 Orestis Pavlou holds an MSc degree in Physics & Astronomy from the University of Amsterdam, as a member of the “Gravitation AstroParticle Physics Amsterdam” (GRAPPA) excellence program. His MSc research project involved the study of the emission of cosmic rays from a Supernova Remnant by analyzing 8 years of data from NASA’s Fermi Gamma-ray Space Telescope.

He is currently a PhD candidate in Computing/Computer Science at the European University Cyprus, studying galaxy formation and evolution, as a member of the Aristarchus Research Center research group. His work mainly involves making use of Graph Theory tools to study the distribution of galaxies via cosmological simulations and to perform data analysis of ultraluminous infrared galaxies (ULIRGs), by analyzing infrared data from NASA’s Spitzer Space Telescope.

He also holds an undergraduate diploma from the School of Applied Mathematics and Physical Sciences of the National Technical University of Athens, where he focused on Theoretical and Computational Physics as well as Nuclear and Particle Physics. His diploma dissertation was a cosmological study of the “Experimental Data for the Accelerated Expansion of the Universe”.

Orestis is a member of the 1010 Asteroskopeion team and is involved in the organization and implementation of many public and school astronomy events, lectures and other astronomically oriented outreach activities. He is also the International Astronomical Union representative for 1010 Asteroskopeion and the European University Cyprus. One of his main interests is astrophotography, with a focus on deep-sky objects, such as nebulae and galaxies.