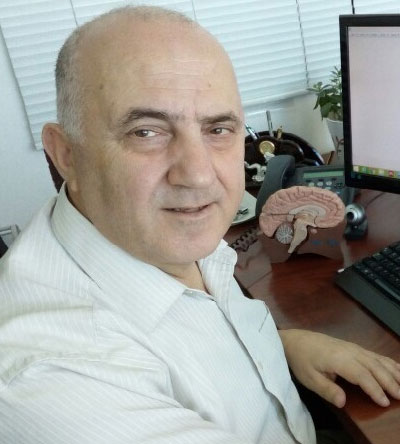 Prof. Andreas A, Ioannides (AAISCS) has a first-degree BSc (1st Class) and PhD in Physics and he worked as neuroscientist 1986 till today in the UK (1986 – 1998), Germany (1994 – 98) and Japan (1998 – 2009). He is the CEO of AAI Scientific Cultural Services Ltd (2009 – today). In 1976, together with his PhD supervisor, Ron C. Johnson, he discovered a new tensor force responsible for the only ground state of the two nucleon system. In 1989 together with J.P.R. Bolton and C.J.S. Clarke, he developed the first tomographic analysis method for non-invasive reconstruction of human brain measurements using magnetoencephaphalography (MEG).

The method, Magnetic Field Tomography (MFT), was applied for the first time to implanted data from National Institutes of health, USA and a series of real MEG data including the study of 40 Hz oscillations with U. Ribary and R. Llinas. He produced the first tomographic animations of brain activity from MEG data in 1990 and in the background of MRI anatomy in 1993 with M. Liu.

He introduced connectivity analysis in the source space for the first time in 1994 and more formally using mutual information with S. Drosdz in 1998. He and LCL introduced for the first time statistical parametric mapping to average and single trial MFT solutions in 1999 and transformations to a common brain atlas establishing group studies for MEG. Together with K. Tanaka et al., he demonstrated for the first time that MEG can localize within cytoarchitectonic areas in 2002 and with L. Liu, G.K. Kostopoulos and P.B.C. Fenwick that MFT can localize accurately deep sources in the cerebellum and brainstem in 2009. He set up and managed theoretical teams in the UK and MEG laboratories in two of the world renowned research institutes in Germany and Japan.

He continued his basic research in a new private research centre that he established in his native Cyprus from 2009, adding to his goals the development of health monitoring and clinical applications through translation of results of basic research, some obtained with expensive instrumentation, to simpler methods using widely available devices.  At AAISCS, he coordinated international collaborations, consortia in national (Cyprus) projects, and scientific coordination of the FP7 project ARMOR and key role in the Horizon 2020 project SmokeFreeBrain. Throughout his career AAI promoted public understanding of his work and science in general with video presentations, articles in newspapers and television, radio and newspaper interviews in the UK, Germany, Japan and Cyprus.

While in the UK his work was selected twice (1993 and 1995) for presentation in the annual Royal Society Science festival (Royal Society Soiree) with images of his work making the cover of the 1995 Soiree. The recent research in Cyprus has produced results that are worthy of great publicity but delayed until patents are submitted (expected around the beginning of 2017).